#cows #gobargas Moody, like everyone else, was fully aware of the importance of cows. He hated to be cowed by cows. But, he was on the horns of the cow dilemma - why did the cow jump over the Moon?
He had, therefore, called a special meeting of people whom he could trust with his life. Prominent among them was Baba Someday, Jet Lee, Hash Budden, Sue Sharma and Nitty Gadcurry.
‘Tell me Baba, why did the cow jump over the Moon? Can a cow really jump that high?’ Moody asked Baba Someday. He, in Moody’s opinion, was an expert on cows.
Baba blinked. He was caught on the wrong foot. He never knew this aspect of the cow. He had been exploiting all the products of the cow. His Pat & Jolie was producing cow milk products. He had also gone in for gobar gas in a big way. He planned to use it to power a future probe to the Red Planet Mars.
But, he had not heard about a cow jumping over the Moon. 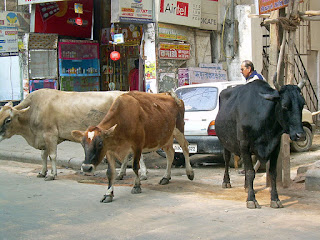 ‘Are you sure it was a cow?’ he wanted to clarify.
‘Of course,’ Moody said. ‘All the kids know about it. It is in a nursery rhyme and in the school syllabus.’
Baba was stumped.
‘I think it must have been a goat,’ Nitty Gadcurry intervened. ‘They can jump over fences.’
‘Or – sheep,’ Hash Budden suggested. ‘You know – we count sheep jumping over the fence when we are unable to sleep. I have advised many of my patients on this. Counting sheep is good for insomnia.’
Moody glared at his audience.
‘No,’ he said. ‘All of us are discussing cows on every platform but, none of you seem to know that a cow can jump over the Moon. I never expected this from you. How can you convince people with such little knowledge?’
It was now Sue Sharma who spoke.
‘I have also heard about this,’ she gave everyone her trademark smile. ‘We must find out more about this.’
‘How will you go about it?’ Moody asked.
‘We can make it a part of one of our post graduate curriculum,’ she said. ‘We can set up a separate research center to study how high a cow can jump. And – train the animals to keep jumping higher and higher. I am sure if they keep trying, they can jump over the Moon.’
‘Good idea,’ Moody said. ‘But – it will take time. I want something fast.’
‘I have an alternative suggestion,’ Sue Sharma once again flashed her smile.
‘What is that?’ Moody sat forward in his seat.
‘I’ll send a mail to the Google chaps. They must know. They have all the answers.’
Moody heaved a sigh of relief.
‘That’s a wonderful idea,’ he said. ‘But, don’t worry – I’ll send the mail. A mail from me will have greater effect than a mail from someone else. I want them to feel important.’ (to be continued …)