#realityshows #TV They were all seated beside the TV set watching the latest edition of a popular reality show. It was in the cave of Lord Shiva and, even though Durga had a separate TV set in her cave as did her daughters Lakshmi and Saraswati, she walked over to Shiva’s cave for the shows. Her daughters accompanied her.
‘I was just wondering,’ Durga mused. ‘When do the wives get time to concentrate on their domestic chores?’
‘Why?’ Shiva asked. ‘There is a favorite saying - she who cooks also combs her hair.’
‘Not any longer,’ Lakshmi quipped. ‘Times have changed. The housewives have domestic helps who do the cooking. And – the housewives go to the local beautician for getting the hair done.’
‘But – I see many of them cook delicious meals in the TV shows,’ Shiva looked at his daughter. ‘That means they can cook. Then, why depend on outsiders?’
Lakshmi laughed.
‘Papa, don’t you know that the housewives today are very busy.’ 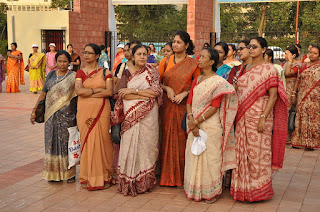 ‘Looking after the studies of their kids?’
‘No. They have private tutors for that.’
‘Oh – you mean they go for jobs? To augment the family income?’
‘Some of them do. But – most of them are always running for other reasons.’
‘Why? If they don’t cook or look after the studies of their kids, what keeps them busy?’
‘I’ll tell you,’ Saraswati joined the discussion. ‘All of them want to appear on TV. That is the latest fad. The hottest topic in any kitty party. Its all about participation.’
‘Participation is good,’ Shiva said. ‘It helps bonding.’
‘This is a different kind of participation,’ Sarasawati explained. ‘Here it is all about bringing home goodies like refrigerators, ovens, utensils, kitchenware carpets, dressing tables. And, becoming celebrities in their own circle.’
‘You mean shopping?’
‘No – winning prizes for guessing the weight of a pumpkin or answering puzzles or singing songs. The days of pallu wearing bahus have gone. Today’s bahus are all get setters. They love to narrate their real life love stories, how they had eloped to get married.’
‘You mean they do not have any time to spare?’ Shiva was surprised.
‘How can they?’ Saraswati shot back. ‘There are so many TV channels and umpteen number of reality shows. They have to learn the basics before they go for auditions. And, to learn the basics they have to attend grooming schools.’
‘Good,’ Shiva nodded. ‘I am glad to see that they have shed inhibitions. Long live women power.’ (to be continued …)