The teacher who taught me Bengali

Here is the twenty first unforgettable character in my life …

This pertains to my schooldays in the period of the late 1950s – 1958 to 1959 to be more precise. I studied in a school run by the Christian Brothers. While most of the teachers were of the Christian Brothers fraternity in their long white uniforms running up to their feet, there were a few exceptions. There was a portly German lady who taught us music, there was another who was in-charge of games and PT, there were the office staff and then there was the induction of three gentlemen in the form of teachers of Bengali and Hindi.
The beauty was that the two Hindi teachers came to school dressed in sherwani and dhoti while the Bengali teacher came in kurta (punjabi) and dhoti unlike other teachers who dressed in European clothes. 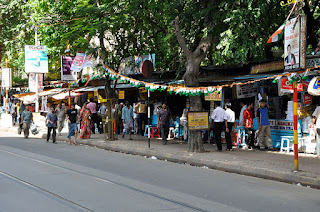 The Bengali syllabus had started when we were in the last stages of school – we had the option of selecting either the lower or the higher levels. Attempting the higher level straightway was problematic and risky because we did not know even the basics. So, the Bengalis in the class opted for the easier lower level.
However, our teacher had other ideas. He had seen Netaji Subhas Chandra Bose first hand having been a part of his Indian National Army; hence he convinced us that being Bengalis, we should be loyal and patriotic enough to learn our mother tongue. Our parents were aghast – if, by chance we did not secure pass marks, it would ruin our future. The teacher convinced them as well. And – thus it came to pass that we toiled with him and within a short span of time our confidence grew – we were able to take dictation, compose complex sentences, write letters etcetera in Bengali to his satisfaction. One fine day, he invited us to his house. It was a single room affair behind Science College – he was a bachelor, cooked his own meals and loved to talk about his experiences with Netaji.
Needless to say that all of us Bengalis cleared the exams successfully – there were five or six of us in the class. Once out of school, I maintained contact with my teacher for some time but then, as normally happens, we lost touch. The best part is that, when I went to college, I decided to prove to myself that I could write in Bengali as well as others. And – my first Bengali story, a crime story, was published in 1967. Many others followed and I became a regular contributor to a number of magazines.

Pollution in Subarnarekha river a matter of concern

He practices homeopathy with a smile

My friends who used to sell saris


900 migrants rescued off the coast of Libya by coast guards

Death toll in the London Tower fire rises to 30, could go up to 100