Moody & Co to invite Eskimos for the Yoga meet (satire)

Moody was, as always, serious and in a thoughtful mood. He had realized that yoga is the be-all and end-all and it can wow the world as it has already done. But, in order to ensure that the memories and euphoria do not vanish, he had to revive interest in this ancient form of art that is unique to our culture.
Yes, no matter what people may say, yoga is an art.
It had been practiced by the sages of yore – and, since doctors were unheard of in the days of Ramayana and Mahabharata, yoga was the only medicine to cure all ills from indigestion to broken arms.
Suddenly the door opened a fraction of an inch and Hash Budden peeped in – he was a doctor by profession and was responsible for looking after various aspects of health. Along with him was Baba Someday – a very busy man who was adept at balancing his interests in both yoga and business.
Moody waved them in.
‘Have you worked out a strategy?’ he wanted to know. 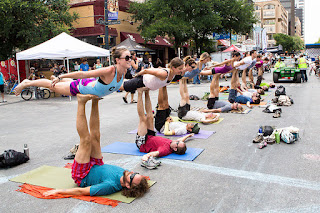 ‘We will make it a bigger affair,’ Baba Someday said. ‘My Pat & Jolie will provide all refreshments right from pure milk to crisp salted biscuits and instant noodles.’
‘Good,’ Moody nodded. ‘We want to project our indigenous products to the world and the yoga meet will be an opportunity.’
‘Who knows, someone might want to import them’ Baba Someday said. ‘After all no one can deny the health benefits of Pat & Jolie foodstuffs.’
‘I think we should invite some dignitary to be the Guest of Honor on the occasion,’ Hash Budden suggested. ‘Like we did in the R-Day.’
‘I also was thinking about it,’ Moody said. ‘Any ideas?’
Before Hash Budden could reply, Sue Sharma entered with Jet Lee. Sue Sharma looked to be excited about something.
‘We have a couple of ideas for the Yoga Meet,’ Jet Lee said. ‘If you can spare a few minutes, the lady can get it off her chest.’
‘Go ahead, I am all attention,’ Moody said.
‘I just now got a call from the land of the Eskimos,’ Sue Sharma began. ‘The lady spoke in broken English and wanted to know when you would go to visit them.’
Moody was taken aback.
‘Why should I go to visit them?’ he asked. ‘What can they offer us except polar bear furs or seal skins or penguins? I don’t think any of those would be useful.’
‘Moody-ji,’ Hash Budden intervened. ‘It is a God-sent opportunity we cannot miss.’
‘Please explain.’
‘Why don’t we invite the Eskimos for the yoga meet? Their leader could be the Guest of Honor.’ (to be continued …)