Didi knows that ghosts have their uses (satire)

‘Have they arrived?’ Didi was blunt and to the point.
‘Yes,’ Moo Cool replied in a whisper.
‘You realize that time is short,’ Didi said, also in a whisper.
‘Yes,’ Moo Cool said. ‘I’ll take care of the whole thing.’
‘Good, they are our trump cards,’ Didi said. ‘They may be invisible to others but we know they exist and will come to our rescue.’
‘I know,’ Moo Cool nodded his head. He had grown old all of a sudden. The one year that he had been out in the cold had its effect on his physique. But he knew that he was back in the seat and had to deliver.
Abhi Shake sat beside him. Poor Abhi was not happy. He has thought of usurping the place occupied by Moo Cool but that is now a pipe dream. Moo Cool is back in the saddle and Didi has rewarded him. 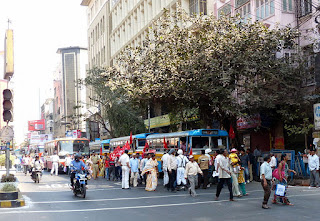 ‘Remember,’ Didi warned Moo Cool. ‘The whole world is looking at us and we must emerge with flying colors.’
Patro Chatto cleared his throat and shifted his bulk in the chair.
‘Yes?’ Didi looked at him.
‘We must not take undue risks,’ he was apprehensive.
‘Have faith in me,’ Moo Cool assured him with his trademark smile. ‘Ghosts have a power of their own. They can make or break empires.’
‘Yes, when they join together, they can be a formidable force to reckon with,’ Omit Misra added.
‘We have seen their strength in that beauty of a movie ‘Bhooter Bhabishyat’,’ Moo Cool said.
‘Well – who all have you invited for the meeting?’ Didi asked.
‘Names do not matter,’ Moo Cool said. ‘What matters is their participation as a whole. They belong to all parties because, once you go up there, you have no separate identity. Therefore, all of them belong to us.’
‘But, our opposition parties will also rope in their own people,’ Didi cautioned.
‘That would be a tiny percentage. I am quite confident that they would not make any dent in the final outcome. You can leave it all to me.’
Even as Didi and Moo Cool were conversing, the door opened a fraction of an inch and in trooped the crowd. Some of them wore pyjamas, others lungi, and a few wore trousers or bermudas. But their faces were hidden behind mufflers – if by chance the muffler went out of place, the sight that would be revealed would make any normal man run for cover. All of them were ghosts. They had ceased to exist physically but remained on paper in the voters’ list. (to be continued …)