‘The die has been cast and very soon no one need to go to London to see the Big Ben or to Paris to see the Eiffel Tower,’ Didi announced. ‘They’ll get it all here in our city.’
‘Yes,’ Moo Cool added. ‘Many such masterpieces would soon decorate the City of Joy. They will add to its charms and bring in the tourists.’
‘All thanks must go to Didi,’ Patro Chatto said. ‘We can proudly say ‘I have seen the Big Ben from up close’ or ‘I have clicked a selfie in front of the Eiffel Tower.’
‘This is a major step in our efforts to woo tourists,’ Didi gave a wry smile. ‘We must arrange some more promotional videos with our brand ambassador.’ 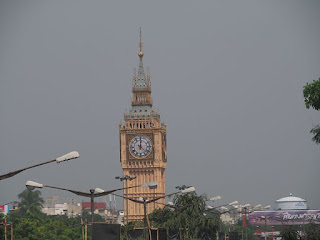 ‘Don’t worry, ‘Dee Wreck assured. ‘We have covered the tram. Our next target is the hand pulled rickshaw. Our model actually wanted to draw the rickshaw and not just sit in it as a passenger with the strains of the super hit song ‘mein rickshaw wallah…’ in the background.’
‘I know him,’ Didi smiled. ‘He loves to live his role. Ensure that he gets a suitable actress as company. He flowers in the company of women.’
‘What is the next landmark in your sight?’ Moo Col wanted to know.
‘I am debating on getting either the White House or the Berlin Wall,’ Didi said. ‘Both are equally good.’
‘What about the location?’ Dee Wreck was curious.
‘We have installed the Big Ben in Lake Town, right?’
‘Yes.’
‘And plan to have the Eiffel Tower in the Eco Park, right?’
‘Yes.’
‘Then the White House can come up in the Millennium Park on the banks of the Hoogly.’
‘But – we had planned to have the giant Ferris Wheel there? Like ‘The Eye’ in London?’ Dee Wreck reminded.
‘Plans can and do change,’ Didi said. ‘Moreover London is already symbolized by the Big Ben.’
‘Then what about the Berlin Wall?’ Moo Cool asked.
‘I have not yet decided,’ Didi admitted. ‘It will be a toss-up between the Berlin Wall and the Great Wall of China.’
‘And, you want it on the borders?’
‘No – installing it on the border will send out the wrong message. It might affect the supply of ilish and I will lose the support of the ilish lovers. I don’t want that.’
‘Then where will you position it?’
‘All around Nabanna,’ Didi said. ‘It will save my policemen the trouble of wearing helmets all the time. Helmets can become a nuisance because you keep sweating - have you not seen cricketers on the field remove the helmet to get rid of the accumulated water?’ (to be continued …)