Moody was subdued. Normally he took the lead but, of late, he was apprehensive. The ringing of the phone kept jolting him out of his trance. Yes, he was in a sort of a trance. Ever since the infiltration of bees, his friends from across the Seas kept reminding him that he must tread with greater caution. One must be careful while handling roses, they have thorns.
Suddenly the dreaded phone rang.
‘What is happening to my temple?’ it was Rum Mudda at the other end. He was Moody’s Boss and he sounded to be in a not-too-happy mood.
‘Temple?’ Moody squirmed in his chair.
‘Yes,’ Mudda expressed his annoyance. ‘I expected that you would put the matter on the fast track. But you are moving at a snail’s pace.’
‘I have my liabilities,’ Moody tried to explain. ‘It is a sensitive issue and it has to be given sufficient time. It falls in the category of ‘handle with care.’ Haste will make waste.’ 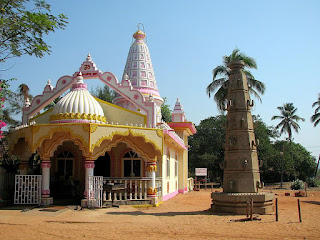 ‘What do you mean?’ Rum Mudda was impatient.
‘Work is on in full swing,’ Moody said. ‘I am keeping a tab on the progress and am getting regular feedback.’
‘But – we must declare a timeframe.’
‘Don’t worry Mudda-ji, all will come in due course. You cannot put the cat before the horse. Therefore, you must have patience.’
‘Oh Moody-ji, we have waited too long, we want to see the temple.’
‘Our boys have made a model. I have seen it when I last visited the workshop. It is just the right size to fit into the cavity of the rocket.’
‘Workshop? Rocket? What are you talking about?’ Rum Mudda flared up.
‘I am talking about the model of the temple that our boys in ISRO are making. They will send it to Mars in Mangalyaan-2. We will do what America or Russia or France or Japan have never thought of doing. We will position our temple, the first ever temple, on the Red Planet Mars. It will be a tribute to my Make in India philosophy.’ (to be continued …)

Moody gifts his neighbor a turban on his birthday (satire)


Use online honey trappers to test the fidelity of the spouse

Migrants ready to pay £1,200 to people smugglers for trip across Channel in UK-registered car

US airdrops 50-tons of ammunition for M-16s and AK-47 to Syrian fighters
Posted by prabir ghose at 8:59 PM