The lost world of ‘kabiraji cutlets’

Frankly speaking I am still not clear in my mind about the origin of the word ‘kabiraji’ in respect of those mouth-watering food items that have a prefix of ‘kabiraji’. As far as my knowledge goes, ‘kabiraj’ is supposed to be a doctor of sorts who deals in alternate medicines. They used to thrive in the era of Sarat Chandra, Bankim Chandra and Rabindra Nath as one can know from the numerous references made to these learned members of the medical profession in their novels.
The general concept is that the ‘kabiraj’ dabbled in Ayurveda and had a vast knowledge of medicines that came from natural sources like leaves of plants or roots. A combination of a mortar and pestle was an integral part of their practice. And, their medicines were effective. 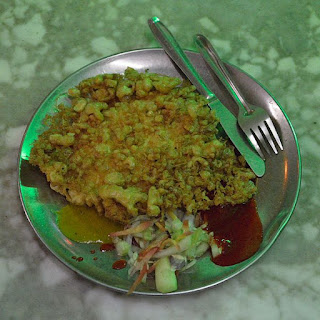 Anyway, the link between the ‘kabiraj’ and ‘kabiraji culet’ evades me. I just cannot fathom the reason why a plate of mutton cutlet or prawn cutlet or chicken cutlet carry the prefix of ‘kabiraji’ when there is no medicine involved in its preparation.
I tried to get an answer from the internet and, only one answer appeared to throw some sort of light on this mystery – ‘kabiraji’ was actually a distortion of the word ‘coverage’!
Well – that could be a plausible answer because for a cutlet to earn the prefix ‘kabiraji’ it has to be covered with egg batter. No, not the dip-in-egg-batter-and-fry type but one where the egg batter was spread on top of the cutlet. What happened is that the egg batter surrounded the cutlet from all sides and curled up and created a blister-like appearance.
The aroma from the ‘kabiraji’ cutlet can knock anyone over. Only – such extraordinary food items have vanished from the scene. Those days of ordering the ‘kabiraji cutlet’ are like dreams. The young couples (usually unmarried) occupied the cabins of restaurants for some privacy and the waiter took the order promptly and pulled the curtains as he left. But, he delayed serving the cutlets – the delay was intentional and it entitled him to a generous tip!! (to be continued ....)
(Image courtesy wikimediacommons.org)

Some more interesting 'must reads'-

Spider-Man will be seen in his traditional costume in ‘Captain America: Civil War’


ISIS planned to carry out ‘lone wolf’ terror attacks, target the Queen and the Royal family


Independence Day as I have seen it

The days of mughlai parathas