#kolkatabookfair #boimela It was time for the annual Kolkata Book Fair, fondly known as Boi Mela. It is a reason for celebration and millions of people from all walks of life come to the venue to not just look at the books on display but, also to partake of the hundred and one outlets that invite them to taste the wide variety of food stuff.
‘I see tough times ahead,’ Abhi Shake said. He was closeted with Moo Cool, Patro Chatto, Dee Wreck, Fear Had and Omit Misra.
‘Our opponents are ganging up to dislodge us,’ Patro murmured. Of late, he was finding to speak clearly – he had put on weight and it affected his speech pattern. He was always out of breath.
‘We must put our heads together to arrange finances,’ Omit Misra wiped his glasses for the umpteenth time. He was finding it hard to balance his books. He was a man of finance and, even though it had been drilled into his mind that he must cut his coat according to his cloth, he had to cut corners to make both ends meet.
But Didi never understood him. She kept asking for more and more and he had to keep borrowing to satisfy the demands. ‘I think we can leave finance to Didi,’ Moo Cool said. ‘She knows best.’ 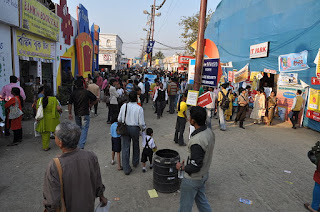 ‘Last time she sold her paintings for crores of rupees,’ Dee Wreck reminded.
‘But of late she hasn’t picked up the brush for a long time,’ Abhi Shake said. ‘When will she crate her masterpieces?’ ‘Don’t worry,’ Moo Cool smiled. ‘She has a powerful pen. It is more powerful than her voice and she knows just how to beat the odds.’
‘You mean her books will rake in the crores?’ there was disbelief in Omit Misra’s voice. ‘Those who love paintings may not love books.’
‘Just wait and watch,’ Moo Cool said. ‘Let the Book Fair open and you can see how her books fly off the shelves. They’ll sell like hot cakes. She loves to write as she loves to draw. Deep within her lies a dormant artist who rears its head when required especially to generate funds.’
‘She has the stamina,’ Dee Wreck added. ‘Drawing requires a studio but writing does not. She has been traveling a lot and, while on the move, she has been penning her thoughts. And – she will be releasing ten of her books in the fair.’ (to be continued …)

Walmart surrenders to Amazon, decides to close down 269 stores in the US and Latin America

Mass burning of all cigarettes in Turkmenistan to stamp out smoking


David Bowie succumbs to his 18-month battle against cancer

Kangana Ranaut learns horse riding for her role in ‘Rangoon’

More than 23 killed in Splendid Hotel, Burkina Faso, by al-Qaeda