#patisapta #makarsankranti ‘I smell some goodies,’ Lord Shiva announced as he paced outside his cave. He had his trident with him and he used it to support his weight. He had grown a bit bulky because there was not much running around.
‘Yes,’ Durga smiled. ‘Our girls are preparing the goodies for celebrating Makar Sankranti.’
‘I only hope they think up something new,’ Shiva said. ‘The same coconut stuffing in between a layer of rice paste is to boring.’
‘Don’t worry,’ Durga said. ‘They’ll surprise you with their creation.’ 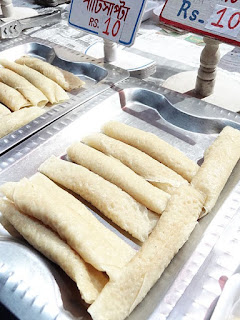 Suddenly Ganesh strolled out of his cave. He seemed to be pleased with himself. Unlike Shiva’s other children, Ganesh was always in demand. Each and every man runs after money and, money means Ganesh. Without his blessings, money does not come.
Of course, Lakshmi also shared Ganesh’s popularity - but, she was more liked by the women. They prayed for her blessings – and it was usually restricted to only Thursdays. The reason was obvious – they had so many other chores to attend to. Therefore, praying to Lakshmi was reserved for one day in the week.
Ganesh held a kite in his hand and his gang of faithful mouse was following him – one of them, the leader, kept tugging at the thread attached to the kite.
‘Where’s is your brother?’ Shiva asked.
‘He is putting finishing touches to his hair,’ Ganesh said. ‘He has got a new gel. It will keep his hair always at an angle. No amount of wind can ruffle it. He is trying it out’
‘Are you not competing in any kite festival?’ Shiva wanted to know.
‘Kartika and I will pit ourselves against Bhringi and his gang,’ Ganesh said.
Shiva slowly walked towards the dining room. The aroma of goodies was floating in the air and drew him to its source. But – Durga shooed him away.
‘Have patience,’ she said. ‘The girls are doing a great job. Don’t disturb them.'
‘I never knew that making patisapta was so complicated,’ Shiva murmured.
Durga grinned.
‘They have got hold of a new recipe from the TV,’ she said. ‘They are putting the finishing touches.’
‘What is so special?’ Shiva demanded to know.
‘The ingredients,’ Durga said. ‘It is going to be a special patisapta. They want to give it a global flavor. With additives that foreigners can recognize. It will be a part of the Make in India initiative. I heard Saraswati wants to patent the recipe.’
‘Well,’ Shiva sighed. ‘To me patisapta is coconut stuffing in a bed of rice paste.’ (to be continued …)

Walmart surrenders to Amazon, decides to close down 269 stores in the US and Latin America

Mass burning of all cigarettes in Turkmenistan to stamp out smoking


David Bowie succumbs to his 18-month battle against cancer

Kangana Ranaut learns horse riding for her role in ‘Rangoon’

More than 23 killed in Splendid Hotel, Burkina Faso, by al-Qaeda