The full team had assembled in Didi’s house and everyone was serous. There was Moo Cool, Patro Chatto, Abhi Shake, Omit Misra and Dee Wreck. They were Didi’s most trusted assistants and they knew that wooing industrialists to invest in the state had become a pipe dream.
Like the airport waiting for international flights to start operations.
Or – launching domestic flight routes that did not attract passengers.
‘How do we come out of the rut?’ Moo Cool asked.
‘We have to wait and watch,’ Abhi Shake said. ‘Our leader knows what is best and she will succeed where others have failed. Have faith in her. She is in the saddle and we have to support her initiatives.’
‘Yes,’ Omit Misra peered through his glasses at his compatriots and agreed. ‘We have held meetings with so many big shots. They have come here and we have made them feel at home.’ 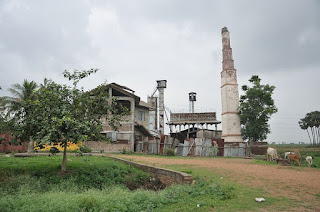 ‘But – the end result is getting delayed,’ Moo Cool mumbled.
‘We just cannot put up our hands and surrender,’ Dee Wreck appeared excited. ‘I have coined a song.’
‘Let us hear it.’ Abhi Shake prodded him.
‘We have seen industries in London, we have seen industries in Singapore but industries in our state are the best by far,’ Dee Wreck sang in tune with ‘ … the ladies of Calcutta are the best by far.’
‘The trouble is the perennial tussle of which came first – the egg or the hen,’ Patro Chatto shifted his bulk in the chair to reposition himself.
‘What do you mean?’ Moo Cool demanded to know.
‘It is the fight over the land,’ Patro explained. ‘We want big industries but that requires land. If we part with the land, our farmers will desert us. And, if we do not give them land, the industries will not come. It is a Catch-22 situation.’
Suddenly Didi made her appearance.
‘How many did you catch?’ Didi looked at Patro. He blinked. He imagined that Didi wanted to know how many he caught cheating in the exams.
‘Actually, the exams went off peacefully,’ he assured her. ‘No cheating.’
‘Good – that means there would be an addition of another five lakhs educated next year?’
‘Yes.’
‘And – we have to arrange jobs for them?’
‘Yes.’
‘Then let us plan from today itself,’ Didi said. ‘Once we know the figures, we can make realistic estimates of how many cycles we will need next year. And, how many sarees. It will also help me to work out how many more paintings I will have to create and how many more books I must write next year’
‘And – it will help Omit-ji draw up his financial strategies,’ Moo Cool added. ‘He is an expert in balancing the budget.’ (To be continued …)