#airpollution The airport of Kolkata had to be shut down for eight hours because of fog – fog is not unnatural during winter. It slows down traffic on the roads, trains get delayed and there are accidents due to poor visibility. But, the problem is that such a condition has been blamed on air pollution. And – that is what has kept Didi awake night after night. She wanted to rid the menace of air pollution once and for all and, suddenly, an idea came to her early in the morning.
‘Abhi,’ she rang up Abhi Shake, ‘I want you in my office immediately. With all the others – this is a serious matter.’
Abhi Shake hated to leave the warmth of the blanket but, Didi’s order is an order. Therefore, he contacted Moo Cool, Patro Chatto, Omit Misra, and Dee Wreck and arrived on the trot. Didi does not like to be kept waiting.
Of course they knew that there would be gallons of hot tea and heaps of delicious jilebis and kachuris to help ease tensions. Didi never forgot these little things to keep her flock intact – the local tea and snack shop was also happy to be of service to Didi.
‘How many bullock carts do we have?’ she asked nobody in particular.
‘Why?’ Moo Cool asked. 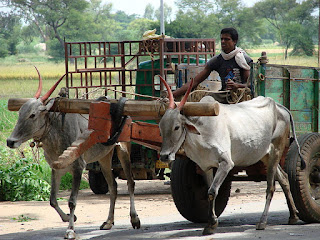 ‘I have a solution to tackle pollution,’ she smiled. ‘Delhi is going for odd-even formula. I want to go for a more down to earth formula. I want to ban all petrol and diesel run vehicles from our roads. They are the main culprits.’
‘I see,’ Moo Cool said.
‘So – how many bullock carts do we have in our state?’
‘We have not taken stock – but, on a rough estimate, there could be ten thousand.’
‘OK – I want ten times that,’ Didi said. ‘They must be equipped with cushioned seats and must have stocks of newspapers and magazines. There must also be steps for people to board and alight. The wheels must be rubber protected.’
‘Good idea,’ Omit Misra agreed. ‘Normally people waste time while going to office and while returning due to traffic jams. With bullock carts, there will not be any traffic jam and, of course, the travel time could increase.’
‘They must pay that much price to breathe fresh and unpolluted air,’ Didi said. ‘Omit-babu – contact the industrialists and ask them to go ahead with bullock carts. These factories will not need too much land and our land banks will be sufficient. Moreover, it will generate direct and indirect employment. And – those veterinary doctors and blacksmiths would get job opportunities.’
‘Didi,’ Dee Wreck grinned. ‘You are a genius. Your solution to pollution is a fantastic one. You only can deliver the goods. I will post it on Facebook.’ (to be continued ..)

Rice on rooftops – a masterplan (satire)

Didi to gift soaps and towels to kids (satire)

Saraswati and Lakshmi and their girlish talks (satire)


Juhi Chawla learns how to ride a scooty

Thieves make away with sandalwood trees from Santiniketan

76% of butterflies vanishing in Britain - a result of climate change

Scotland Yard launches biggest ever crackdown on guns in London