Sitting high up on top of Mount Kailash, Lord Shiva was watching Ganesh stifling a yawn. Normally, he is a very active individual but, of late, he appeared to be off mood.
‘Did you get a good night’s sleep?’ Shiva asked his son.
‘Life is boring,’ Ganesh replied. ‘My disciples do not pray to me anymore. They are busy trying to wriggle out of a tricky situation of outdated banknotes.’
‘I know,’ Lakshmi said. She had joined her brother. ‘Your disciples do not pray to you but, I am besieged with prayers from my devotees. They are the women who run the households – they do not know how to account their hidden treasures.’
‘The situation is certainly gloomy,’ Shiva murmured. ‘But - I have my eyes and ears open to see the antics of the leaders.’
Durga now joined her husband. She had been in the kitchen preparing samosas – the hot snacks could liven up any dull atmosphere. 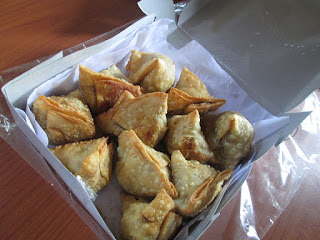 ‘Since when have you got interested in politicians?’ she asked, wiping her palm on the pallu.
‘Watching them flitting from one place to another is fun,’ Shiva grinned. ‘One of them goes around the world, the other goes around the country.’
‘They want to spread their base and eliminate all types of opposition,’ Durga said.
‘That is downright silly,’ Shiva went on. ‘For life to be meaningful, there must be some sort of opposition. You must have someone to fight with. Otherwise, life becomes dull and boring.’
‘Both of them have to do something to keep themselves busy. Remember, an idle mind is the devil’s workshop.’
‘So – they hit the trail,’ Shiva was not happy. ‘They don’t have any family to support as such. One of them is married and boasts of his 56-inch chest. But, his wife is always away on pilgrimage. The other boasts of her hawaii chappals and has not yet tied the knot.’
‘That is why none of them understands the hardships of the family man’ Durga sighed. ‘Let us not waste our time discussing them. I plan to give you a surprise for breakfast. Let me move to the kitchen.’
‘I smell samosas in the air,’ Ganesh said. ‘Must be to test the ghee you have obtained from the yoga guru, right?’ ‘All the better to fry them with,’ Durga said and moved towards her kitchen. (to be continued …)

President Pranab Mukherjee to be present for Vikramshila Mahotsav

Joint action by RFA, Royal Navy and US Coast Guard nets huge haul of cocaine from the sea

Jackie Chan gets an Oscar after a 56-year career